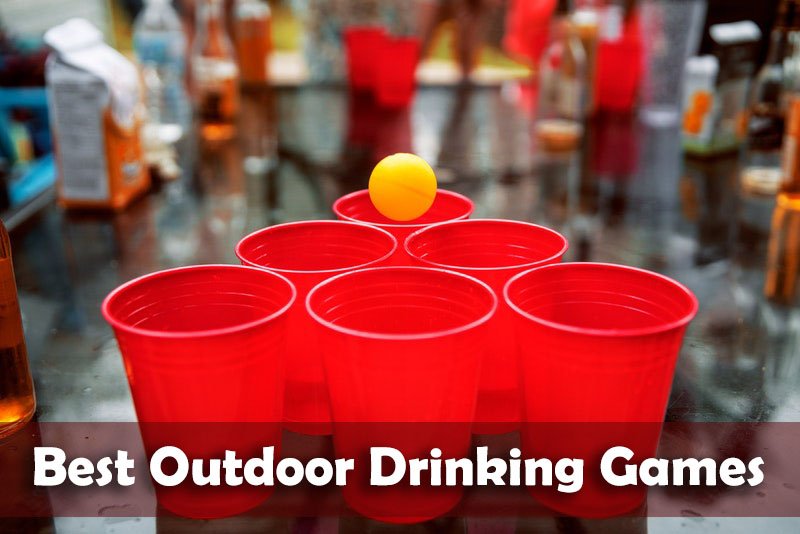 There is plenty of time left of the summer. That means there’s plenty of fun to be had. Sunny days, time by the pool, and nightly barbeques sounds like the perfect way to spend the rest of the warm weather that we have left. Among all other activities that can be carried out during the summer, outdoor drinking games are some of the most popular things to do during the warm weather. When you’re having a large party at your house and plenty of beer, it seems that drinking games are only natural.

There are so many different outdoor drinking games to pick from. So many to have fun with. There’s endless games that you can play with your friends or family members. Why are drinking games so popular? It’s more than just a quick means of becoming inebriated. It touches upon someone’s competitive nature. You want to win. It’s also fun to play with your friends while music is playing and you’re in an environment where you’re comfortable.

It should be noted before we go any further in this article that you should always practice safety while participating in these games. If you are at a party that has drinking games, it’s a good idea to make plans to stay overnight at the house you are in. Or at the very least, have a designated driver or take an Uber or Lyft home. This way you avoid any trouble or causing harm to anyone or yourself.

This may seem like an ominous message to stick in the middle of an article about drinking games, but it’s all about having fun. You can do so by putting some safety regulations into place. In fact, the safer you are, the more fun you are going to have because you can wake up the next day without any reprecussions. Well, unless you wake up with a hangover, but hopefully, you have some Gatorade on hand!

Now that we’ve gotten the disclaimer out of the way, let’s go into the Top Five Outdoor Drinking Games that you can play at your next house party!

Let’s start this article off with probably the most widely known outdoor drinking game there is. Chances are, you have played beer pong at least once in your life. Backyard drinking games wouldn’t be complete if it weren’t for beer pong. The set up is simple. A fold-out table of any kind will do, although; they do sell official beer pong tables tha you can purchase either in a store or online. You then need some solo cups and a ping pong ball. Beer Pong is also known as Beirut and was seemingly invented in the 1950s in college dorms. Which, sounds completely plausible.

The purpose of the game is to toss a ping pong ball into one of the cups, filled a quarter way with beer; so that the person on that side must drink. Admittedly, you may want to lose this game, as it means you get to drink more beer. Though, beer pong really hones in on that competitive bone in our bodies, so winning feels like a truly spectacular thing when you do win. Now, a ping pong goes through many hands and in a time where sanitation is key, I have seen some still keep the set up as is, but when a ball goes in a cup, it’s empty. Each person has beer on the side they can drink so that there’s no cross contamination.

However, you choose to play this game, you’ve probably played it and probably will play it at some point in the future.

Cornhole is another one of the most popular outside drinking games. The game has also been known as Bean Bag Toss. Or in some cases, Bags. It’s a traditional outdoor drinking game that can be found in beachside bars, local breweries, and tailgates. The Cornhole is quite fun and easy to grasp. It’s also such a popular game that it even has its own association. The American Cornhole Association. In case you had any doubts of how beloved this drinking game is.

Due to there being an official association, this means there’s official rules. According to said association, the boards should be 48 x 24 inches in size. The bags should include two cips of feed corn. But, you don’t need to follow the rules to have fun. As long as you know how to toss a bag, or any object; you can capture the spirit of Cornhole with your friends. The best part? You can have a beer in one hand the whole time – which, means you never have to miss a beat when playing.

Drunk Waiter is certainly an interesting name for a drinking game, but it stems from a childhood concept. You had to have spun around as a child and attempted to walk afterward. Imagine doing that with beer? In case you aren’t aware of what I’m talking about, Drunk Waiter starts with you holding something above your head and spinning to the count of ten. Right afterward, you grab a tray of drinks and run to the finish line.

Do you think you could do so without spilling any of the drinks? Most likely not. Especially if you decide to take a shot of alcohol before even spinning. In reality, the point of the game is to not make it to the goal. Instead, it’s to have fun and laugh at the missteps that every participant will go through. Make sure you’re doing this on grass or sand because, remember; you will fall down eventually. Then again, that is half the fun! Imagine laughing with all of your friends, because let’s be honest, no one is going to make it to the end. Probably not even if they were sober!

Next on the list of outdoor drinking games is Polish Horseshoes. Simply put, it’s an adult version of the childhood Horseshoes game you most likely played as a child. You can probably see a common theme here – most backyard drinking games are variations of childhood game. Just with alcohol involved! Now, Polish Horseshoes is an easy outside drinking game. Two teams will attempt to knock down an empty beer bottle placed atop the other team’s pole. You could either use a ski pole or any pole you can get to stick up from the ground.

Typically, you use a Frisbee to knock down the empty beer bottle. Once you hit the empty beer bottle, you earn three points. If you hit the pole and that knocks down the bottle, you earn two points. If you hit the pole without knocking a bottle down, you earn a one point. The goal is being the first to reach either 11 or 21 points. Whichever you determine beforehand. The fun thing is that the other team can actually try to intercept the Frisbee, but they can only use one hand. Here’s where the drinking part comes in. You must hold a beer in the other hand at all times.

Okay, so this outdoor drinking game is a little more dangerous than the others on this list. The thing is, it’s a well-liked game that is played by many, so we couldn’t have a list of popular outside drinking games without mentioning Stump. Stump is inspired by the German Hammerschlagen, which was popularized in New England frat houses. You probably could have guessed that. It’s really fun, which is probably why it’s still played despite being more on the dangerous side. We have to mention this, before we go any further. But, we wouldn’t be doing our job if we didn’t mention Stump!

Stump consists of players surrounding a…well, a stump. Everyone is assigned to hitting a nail. A hammer is passed around to each player. When it’s your turn, you are supposed to flip it and whack an opponent’s nail. If done successfully, the opponent drinks. If you screw it up, though; by pausing or missing a nail, it’s your turn to drink. Tis is outdoorsy as it gets and if you are someone who lives in the great outdoors, you probably have a stump to play this game on. Of course, play with caution.

Which one, out of the list of outdoor drinking games, is the best? Well, that isn’t for us to determine. It’s all about preference. Each drinking game presents its different challenges and different rules. Depending on where you are having the party or who you are playing with will determine what you play. So, it’s really up to you what you want to play. It’s still warm out and this means you should take advantage of the beautiful weather out there! It’s all about having fun, which we could all use right now. Still, be sure to practice safety regulations and as mentioned before, drink responsibly. No matter which drinking game you decide to play, just remember the most important rule of all: have fun!